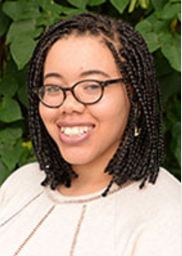 Sika Wheeler graduated as a Women’s and Gender Studies minor in 2012. Directly after graduation, she entered during the election season with Planned Parenthood in the Greensboro/North Carolina area. After that, she worked for two years at a news station before leaving NC for graduate school at Penn State University. Sika is currently in the second year of her masters program in the College of Communications with a graduate minor in Women’s Studies. Her research deals with celebrity culture, the intersections of race and gender, and online communities.

When asked how WGS helped prepare her for “the real world” she answered:

“The number one thing is the amount of writing and discussion I had to do in my WGS minor at UNCG gave me a huge advantage for graduate school in particular. Without it, I would have done mostly film production in undergrad and it would have been a huge shock to deal with the amount of work in grad school. Also, I think we underestimate how important it is to develop who you are as just a human being when you’re entering the “real world.” WGS classes were instrumental for allowing me to work through and understand aspects of my identity that I maybe would not have thought about from a broad perspective before. That has been hugely helpful in terms of confidence, being able to deal with conflict/discrimination in the settings I’m in, and the ability to explain myself to people from different backgrounds than me. My interest is in social justice and media so it seems to be a very natural fit in terms of developing skill sets but I think the WGS program is a huge benefit to anyone that takes even one class; it’s something that I take for granted, but those discussions we had in classes and the classmates I interacted with were some of the most important ones in terms of understanding myself as a dynamic person.”

She goes on to say that she would absolutely recommend WGS as a major/minor for students at UNCG, saying she wishes she would have double-majored, instead of just going with the minor:

“After the second class I took in WGS I took it upon myself to tell everyone that they should take at least one class in the department and I still stand by it. For some reason, we regard studying gender as special interest or only useful if you’re a feminist or woman but it truly is an area that applies to everyone and that I think will be fulfilling and challenging for anyone interested. You’ll become a better writer, you’ll be able to think more critically about the world around you, and you’ll meet really interesting, thoughtful, caring people who are committed to progress.”