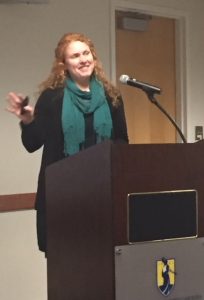 Dr. Shannon Bell presented her work on “Fighting Fire with Fire: Fossil Fuel Industries and the Gendering of Public Relations Strategies.” Bell notes how women make up the majority of grassroots environmental justice activists, primarily drawn into the movement out of concerns for the wellbeing of their children and future generations. Bell claims this effort on behalf of everyday women (mothers) “confers their moral obligation to the women’s movement,” although their concerns are often dismissed as “emotional,” “passionate” rhetoric by “hysterical housewives” and “angry mothers.” Bell challenges the use of women as representatives for industry, citing it as a means to glaze over their destructive environmental practices. In closing, Bell states, “It is increasingly important for reseach to expose the patterns and strateiges of these public relations efforts and the ways that social inequalities (race, class, gender) are exploited to manipulate public perceptions and opinions.” 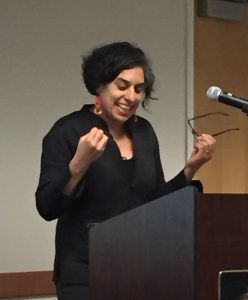 Dr. Sonya Posmentier shared her research on “Generations and Survival: Audre Lorde’s Ecofeminist Pedagogy of Disaster.” Posmentier examines the use of poetry and Black feminists’ impact on Ecofeminism.  Her work centers on a letter Lorde published in a book titled “Hugo: Hell Under Gods Order,” where Lorde discusses her experience of the impact Hurricane Hugo had on St. Croix in 1989. Rather than sending immediate relief, Lorde claims, the US military came in to protect oil rigs under the guise of stablizing looting in the city. In her letter Lorde states, “What is happening on the islands is the same as what is happening to people of color on the mainlands,” tying recent devastation in the Carribean to themes of past. Posmentier suggests that “pedagogy” might provide an alternative to biological motherhood as a way to thinking about the transmission of knowledge and care. She noted the importance of establishing networks of care as a way of responding to ongoing forms of ecological devastation and the ways Black feminists (in particular, Lorde) have theorized the character and importance of such networks 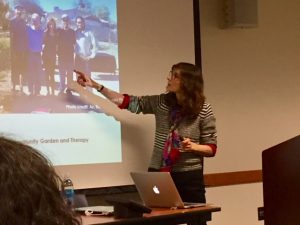 Dr. Stephanie Buechler presented her research on “Agriculture and Renewable Energy Under Environmental Change: Emerging Areas in Ecofeminist Research.” She asks two key questions, “How are rural and urban women who practice agriculture making use of renewable energy today?” and “How are questions of self-determination played out in small renewable energy projects?”Looking specifically at Arizona, Buechler highlights in 2012 the highest proportion of women farmers could be found there, making up 45 percent of all farmers within the state, not including the vast majority of urban farmers not accounted for. Buechler notes the unfortunate presentation of environmental justice issues in renewable energy as being fixed against “dirty sources of energy” (like coal), “obscuring issues of scale within the renewable energy sector.” She ends suggesting, “Feminist political pedagogy can help us understand issues of women’s control over natural resources such as wind and solar resources to facilitate access to food, livelihoods, social networks and cheaper energy.”

Many thanks again these amazing environmental justice warriors again for sharing their work and engaging the UNCG community!