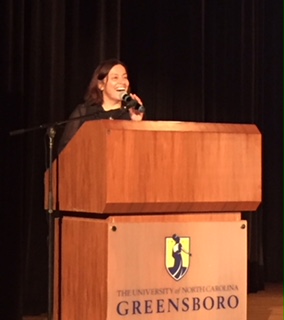 WGS welcomed Dr. Sara Ahmed Thursday, October 18, 2017, for a lecture based on her recent research called “The Institutional As Usual: Sexism, Racism and the Politics of Complaint,” provoking thought into the uses of “use” and its intended function, institutional habits, the idea of occupation, “lifting the lid”, and “complaint” as a feminist gift. She opened her lecture claiming feminists are often heard as “wailing and weeping” no matter what we say. Ahmed suggests, “We become diversity workers when we try to dismantle the structures that are not built to accommodate us.” If discussions about racism and sexism have the power to enact structural damage on the institution, Ahmed encourages us to create damaging effects. By using “complaint” as a feminist gift, we have the power to create shelter and disrupt the use of “use” as a form of political pushback. Ahmed closed by asking, “What does it feel like to put a complaint forward toward a person in a position of power?” She rallies us to form a collective, to combine forces in order to combat sexual harassment. Although she adds questioning a legacy can be interpreted as “stopping something”, we must use our freedom of speech, even if its very use can “become a means of suppressing speech.” Dr. Ahmed ends by noting gender and race as being “divisions of labor,” and how racism and sexism are mere “technologies of the elite.” WGS and the UNCG community thank Dr. Sara Ahmed for taking the time to visit and share her phenomenal research with us.