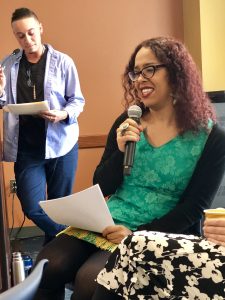 On Thursday, November 1, 2018 the Women’s and Gender Studies Program welcomed Lia  García , better known as Lia La Novia Sirena. And a siren she is. Her presentation “Between Transits and Genders: Performance and Affect as Social Resistance”, was without a doubt, both moving and transformative.

Lia’s performance was a testament to her work with affect as a form of resistance, as well as means to dismantle the barriers keeping us separate. Her pedagogical approach is radical—one replacing misunderstanding with love, with experiencing the humanness in one another rather than focusing on differences.

Lia opened her presentation by acknowledging the Trump Administration, who she claims wants to “erase trans folks”, stating—“We are fucking here.”

Lia’s work directly responds to her fallen comrades in Mexico City. Most important within her approach is creating ways to deconstruct borders and divisions between folks, to undo separatist ideologies. Specifically, how can we destabilize classrooms constructed within academia?

Her most recent work within prisons–Project 10B—was situated within the geopolitical context of Mexico City. By entering the prison, she claims, “My existence is resistance.” In sharing distinct ways of knowing, we can create a collective resistance that builds bridges between academia and those outside. Lia believes knowledge is born from affect, from our shared wounds. 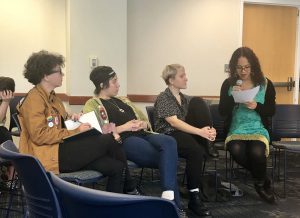 Using this approach, Lia infiltrated a prison and confronted patriarchal systems of dominance and socialization by incorporating what she refers to as “affective sensitizing”. This pedagogical performance utilized touch, something she feels very important for prisoners and effective intervention. By doing so, it subverts the rules of prison. Her methodology begins with skin; something delicate for the imprisoned, where breaking borders between bodies disrupts the order of regulations within prisons, those essentially built against people.

Lia refers to Angela Davis’s idea that prison is a reflection of society, where power dynamics outside are heightened on the inside. She asks, “What does it mean to cross a border in academia? In prison?” As a trans person, inside a male prison, Lia’s goal was to “look at the eyes of people (men) without fear…to write a collective history and transition.” Lia notes, “Trans people only transition within their social context.” It took her four months to be accepted into masculine territories, beginning with a group of two and ending with ten.

This work sought to deconstruct masculine ideologies, to re-inhabit and reactivate the prison space. She claims trans people create ruptures in spaces. Her work is done with the body, touching one another and starting what she notes as “a revolution of questions.” Lia asks, “What do you feel when a trans woman touches your body?” The question arising within this work addresses how patriarchy also affects men. 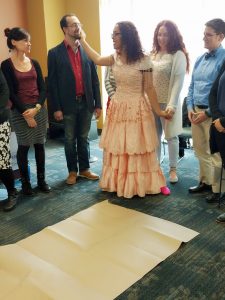 Lia states, “I always recognize the bravery of men who choose to deconstruct their masculinity with me, to go to the depths with his siren.” She realizes her way of being in the world is often confused with an act of seduction. However, Lia claims, “Being close to me is part of my essence and wanting to be close to people is a pedagogical choice.”

Lia opened a space for the audience to participate in this transformative process as her presentation neared ending. Circling around her, Lia transitioned before us, and we collectively transitioned with her. She ruptured the space indeed, leaving us emotionally open and transformed. We are deeply grateful for Lia taking the time to share with us, this most radical and effective means of breaking borders and severing divisions. We need more feminisms that seek to build bridges and address the separatist ideologies that continue to bind us.

Thank you Lia La Novia Sirena and all the UNCG community who joined us for this special event.